A Kennel of Famous Dogs in Art and Entertainment 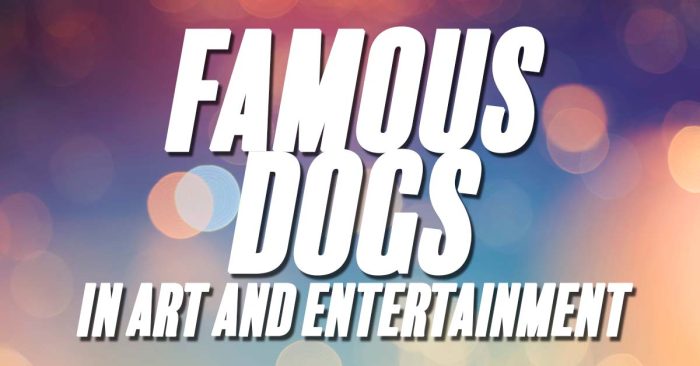 A Kennel of Famous Dogs in Art and Entertainment

Dogs have always been a popular part of literature, art, movies and television. The number of famous dogs is almost uncountable.

The early days of film and television brought us Rin Tin Tin and the Little Rascals had Peety. Later, TV and movies introduced us to Benji, Beethoven, and Hooch. Animated dogs include Scooby Doo, Marmaduke, Goofy, Shaggy and Astro. Other noted canines include Clifford the Big Red Dog, Marley from Marley and Me and even Frazier’s “Eddie”. Dino from the Flintstones doesn’t count. Although he acted like a dog, he was, in fact, a dinosaur.

There are three dogs, however, who rise above the rest when it comes to fame and, in some cases, the fortunes they generated. These are the triplets of the Doggy Mount Rushmore.

Toto certainly wasn’t the star of the Wizard of Oz, but was critical in the plot. He was the reason Dorothy left home in the first place, and was there to greet her upon her return. Perhaps most importantly, Toto only had one single major film appearance and he nailed it. It sent him to lendary doggy status. The fact Toto had a rock band after him doesn’t hurt either. Toto lands at number three on our list.

For a couple of generations, Lassie was synonymous with heroics in books, movies and television. If a family owned a Collie it was difficult not to call it Lassie. If a family owned a dog of any other breed, naming the dog Lassie was unheard of. In spite of the heroics, Lassie rarely had a hair out of place. The only thing keeping Lassie from the number one spot is longevity and relativity.

Charlie Brown’s dog tops our list of famous dogs for a multitude of reasons, not the least of which is a distinctive, edgy attitude. Snoopy started in comics and soon expanded his empire to lunch boxes, stuffed animals, T-shirts and a number of other promotional items. He has been in movies and a series of seasonal specials unmatched by any other canine. The Royal Guardsmen even had a hit song paying tribute to the beagle, entitled “Snoopy and the Red Baron”. Even though amusement parks have children’s areas dedicated to him, he still lives humbly on top of his dog house. There is no doubt Snoopy should be number 1 on anyone’s list of famous dogs.

Did you know that dogs could affect your homeowners’ insurance rates? If you have any questions about auto, home, life or business insurance, contact us!